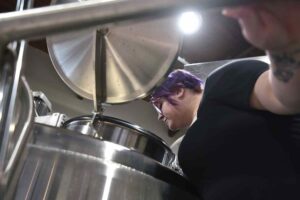 What is your title at Tumbled Rock?

Head brewer, no make that head brewster. That’s the English term for a female brewer.

How did you come to this career and to Baraboo?

I’m originally from California, so you could say “cost” sent me here, plus my partner is from the Midwest. I fell into brewing when working as a server in a brewpub, then worked as an intern and assistant brewer at a number of California breweries. I won a scholarship through the Pink Boots Society for a brewing school out of Chicago. While math and chemistry were not by strength in high school, I discovered I like this kind of chemistry.

Very traditional. I’m not trying to reinvent the beer wheel. I want to know what the community wants to drink. My goal is to make accessible, consistent, solid, “good beer.” 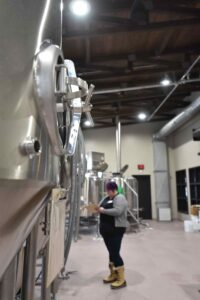 What’s your favorite brew on the menu and what’s on your wish list?

At the moment, I like the Raspberry Imperial Stout, a seasonal aged with fresh raspberries and cocoa nibs, only available on draft. As for my wish list, more traditional English-style ales and more old-school farmhouse ales. I’m lucky to have creative freedom here and I can’t wait for the summer brewing season.

How does Tumbled Rock connect back with the community?

We try to source as much locally as possible. Visitors want to know where their beer comes from. You have guests who plan their trips around beer. We also like to support other local businesses. We have great proximity to Devil’s Lake State Park where I’ve spent a lot of time and Baraboo is just a great city. 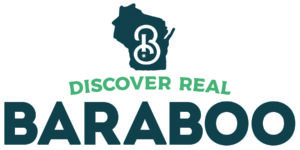